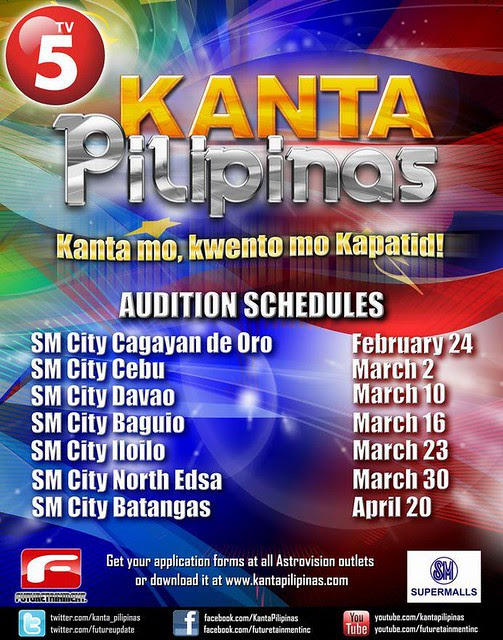 Breakout and breakthroughs at SM City Batangas the last on-ground audition
The last streak may just be it. TV5's newest and biggest singing reality search Kanta Pilipinas held its last on-ground auditions April 20-21 at SM City Batangas. The last opportunity to get approval from Inspirational Diva Ms. Jamie Rivera, award-winning musical arranger/composer Mr. Jimmy Antiporda and Talent Manager Ms. Maristel Sempedro was quite tough with more than 247 aspirants. Ms. Nini Matilac, Head for TV and Film of Futuretainment Inc., joined in selecting the best talents for the show.  Like what they have done in Cagayan De Oro, Cebu, Davao, Baguio, Iloilo and SM North auditions, hopefuls were given tips and suggestions on how to improve their performances and what best to do next time they try to audition in other contests and programs. Since looks are not enough to get in any singing reality shows, those who failed auditions in previous on-ground auditions determined to try their luck on the last on-ground auditions at SM City Batangas. Some aspirants who followed the judges' suggestions and criticisms made it and some did not despite the long travel from other regions. With four audition judges arguing on points to consider for each contestants who tried luck on stage, the decisions were sometimes unanimous and magnanimously split. A blind choir singer traveled all the way from Quezon City and wowed the judges while a girl from Zamboanga made the judges awe at her performance. There were also groups and performances who were so great on the first day and failed to get in the final list on the call-back auditions. Wrong choice of songs and missing soul in performances made some aspirants cry on stage but grateful for the experience after.  Just when the crowd was set to leave the audition came a beautiful lady from Quezon City who wowed the judges with her appearance and voice quality. The last on-ground auditions drama continued with the call-backs from where 48 in the list cut down to 29. The judges found it difficult to eliminate some contestants whose voice quality was compared to those seen in international singing reality searches. Audition Judge Mr. Jimmy Antiporda provided some contestants piano musical arrangement to those with wrong choices for the last chance to get the approval of the judges. Some made it and some did not. What will happen next? The excitement continues as the next firsts of Kanta Pilipinas will unveil next week! Don't miss your last chance to get in TV5's biggest and newest singing reality search. Online auditions deadline is until April 26, 2012 so keep submitting your entries. Kanta mo, Kwento mo Kapatid! Soon on TV5! For more updates, like the Facebook Page of Kanta Pilipinas at  https://www.facebook.com/KantaPilipinas and follow us also on Twitter @Kanta_Pilipinas.

Set to conquer the Summer Capital of the Philippines tomorrow and the following weeks (IloIlo, Manila and Batangas), TV5’s Kanta Pilipinas continues to scour the country in search of the next big star able to make the nation sing.

The Dream from Cagayan De Oro

With 180 registrants last Feb. 24, 2012 in SM City Cagayan De Oro reaching the cities of Iligan, Misamis and Cagayan, 76 hopefuls were called back and only 37 passed the judges’.  Filipino pop songs became the favorite rendered on the stage with many who rendered the Grammy Award winning songs of Adele and Whitney Houston, hopefuls came from different communities and barangays. Inspirational Diva and audition judge Ms. Jamie Rivera was excited to listen to the stories of the Cagay-anons. Award winning Cross Genre Composer, Arranger, Producer Mr. Jimmy Antiporda raised eyebrows asking a couple who sang on the stage. “May conflict ba yan?” relating to the girl singer and pianist boyfriend as he was alluded in the same shoe with Ms. Jamie Rivera in the past. Ms. Maristel Sampedro became the comic relief throwing funny comments at gays impersonating Whitney Houston on the stage. What astounded the judges and onlookers was the ex-convict contestant who vented denouncing his past as a former member of the Akyat-Bahay gang. There was also one with 11 siblings living in different parts of Mindanao hoping to be reunited with dreams through Kanta Pilipinas.

Fun and more fun of TV5’s Kanta Pilipinas’ call for the nation continued in Cebu last March 2, 2012. Hosted by Jhai’Ho, the event center of SM CITY CEBU filled the mall with 424 registrants and more than a thousand onlookers and mall-goers when TV5’s Kanta Pilipinas began the auditions. Audition Judges Ms. Jamie Rivera, Erickson Raymundo and Mr. Vehnee Saturno entertained the crowd with their comments and reactions. Interesting songs and stories unveiled like a girl from Surigao who won a local contest in her province was sponsored by the Mayor to go to Cebu to audition so she can fly to Manila to look for her Dad whom she never met. The humble dream to be reunited with the father was referred as “Taong-Grasa”. Ms. Jamie Rivera tried to enliven the spirit of the sobbing participant, “Kung ang tatay mo taong grasa, alam ko kung ano ka (Baby Oil”? which the mob appreciated. Cornerstone Talent Management Center Head Mr. Erickson Raymundo pushed the inspiration more with his comments, “Bigay mo na lahat ng Kaya mo, Buwis Buhay na ito”.  Another pupil-dilating story was a girl who has Retinitis Pigmentosa (a rare disease suffering from loss of sight at night), a girl born with hairlip but can now sing and a girl who want to give honor to her island (referring to Siargao). From the 424 registrants, 51 hopefuls were called back the next day and only 16 passed to get to Manila.

Adele and Whitney were still the national anthem among contestants along with other standards and OPM pop songs like Angeline Quinto’s Patuloy ang Pangarap in SM CITY DAVAO last March 10, 2012. Hosted by the perky and lively Jhai Ho, TV5’s Kanta Pilipinas in SM CITY DAVAO became the talk of the town especially after the last calamity struck in the province. Giving hope to all Davaoeños, Ms. Jamie Rivera, Mr. Jimmy Antiporda and Mr. Erickson Raymundo enjoyed the performances of Davao hopefuls. From the roster of 378 registrants coming from the cities of GenSan, Cotabato, Sarangani and other outskirts, 46 contestants were given another chance to get the judges’ attention the next day. There was one welder who stood out despite his looks rendering an unforgettable performance and a farmer who dreamt of having his own land. Stories of broken families and living with stepfather were cognizant to the other contestants’ sorrows except for an interesting unemployed young man who makes a living out of singing earning his talent from his disabled grandfather. Ms. Jamie Rivera had a hard time choosing who will go to the next level after consecutive outstanding performances of the hopefuls. At the end of the second day call-back auditions, 22 hopefuls from Davao made it in the list of eliminations.

The call for the nation to sing continues in SM CITY BAGUIO tomorrow and SM North EDSA on March 30. TV5’s Kanta Pilipinas on-ground auditions will commence on April 20, 2012 in SM City Batangas. Don’t miss your chance to shine with #Kanta_Pilipinas

The looks and the talent soar in Baguio
TV5's newest singing reality search, Kanta Pilipinas held auditions at the Summer Capital of the country, Baguio City. The nationwide search for the country's biggest talent brought more crowd witnessing the Ilocanos take the stage with formidable and truly exceptional celebrity judges, award winning Cross Genre Composer, Arranger, Producer Mr. Jimmy Antiporda, Power belter Ms. Bituin Escalante and Cornerstone Talent Management Head, Mr. Erickson Raymundo. Powerful songs sung and interesting stories unfolded with more than 193 registrants who tried and participated. Perky and crowd-attraction Jhai'Ho opened the program with dynamic song and dance boosting more confidence of the contestants. Compared to the former auditions, the hopefuls in Baguio did not choose Adele's songs and stuck to standards and classics. Onlookers and mall-goers were drawn to the stage as many hopefuls look truly exceptional and pleasing. Was the looks enough to get the vote of the judges? Ms. Bituin Escalante was teased in the middle of the auditions to sample what would be "giving all you've got" performance. Singing while sitting, more audience were thrilled and captivated at our country's power belter's rendition of Alicia Key's "If I Ain't Got You". Distinct and unforgettable stories that inspired the songs of the hopefuls include a battered teenager who would hide in different places of the house all the time. An interesting twin was astounding with the song and the story sharing how their father had always taken their income in singing. Battery stories continued with one who is always hand-cuffed by the father getting inspiration and passion to sing from the struggles. The stories behind the songs brought the others to the next level. From a batch of 193 registrants, 43 were called back and only 16 was given the recognition to compete with the nation when Kanta Pilipinas begins airing on July. Was the looks or the drama enough to take them to the next step? Will they be fortunate to compete for the final list? These and more we have all to look forward with Kanta Pilipinas which will be airing on TV5 soon!

The discerning exceptional performances from Iloilo
TV5's Kanta Pilipinas brought the Filipino pride, musical tourism set to promote the country's local talents in the City of Love, Iloilo last March 23-24, 2012. If it was so easy for the contestants in other regional audition venues to come to the stage and bring the house down with their confidence, the Ilonggos were so nitpicky and conservative supporting the hopefuls who had more talent than stories. This time, the country's considered RnB Siren Ms. Arnee Hidalgo joined our panel of judges, Cornerstone Talent Management Head, Mr. Erickson Raymundo and award-winning cross genre composer, arranger and producer Mr. Jimmy Antiporda selecting the country's top local performers in SM City Iloilo. The songs took over the stories with more outstanding performances of Ilonggos on the stage. One of the most unforgettable hopeful was a young teenager who sang a Jovit Baldivino's "Too Much Love Will Kill You' dedicating the song to his girlfriend who died of leukemia. Another hopeful from Boracay composed his own songs and a product of broken family who longs for his father's love with his songs. The inspiring stories that created more color and passion to the song wowed the judges in Iloilo. From among the few registrants, almost half were called back the following day and the final list  from Ilonggo were 16 lucky hopefuls who will vie their chances in Manila soon. Were the stories more powerful than the songs? We have too much to look forward with TV5's Kanta Pilipinas as more performances will unfold in the upcoming auditions set on March 30 at SM City North EDSA and April 20 in SM City Batangas. The excitement continues with the country's biggest and newest singing talent search that's truly Filipino, Kanta Pilipinas, soon to be airing on TV5! Let the song uplift the nation with Kanta Pilipinas! We all believe that Filipinos are the best singers in the world! Tara na! Kanta mo, Kwento mo, Kapatid #Kanta_Pilipinas!
Labels: Kanta Pilipinas Press Release TV5

wonderwoman45 said…
One of my good friends got in! :) Watch for Jacob Gayanelo!!!