The Search For the Next KPOP Star Begins! 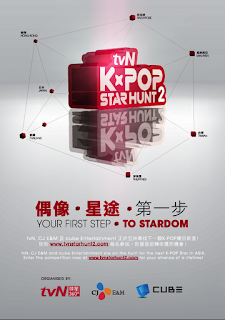 Manila, Philippines, July 19 – Are you aspiring to be Korea’s next pop sensation? Make K-Pop Star Hunt your first step to stardom! With the success of its first season – attracting more than 50 million viewers across Asia – K-Pop Star Hunt is set to make its triumphant comeback for a second season.

Through K-Pop Star Hunt (Season 2), talents across Asia will have the incredible opportunity to make K-Pop miracles of their own. Aspirants from the Philippines, Taiwan, Hong Kong, Singapore, Thailand, Malaysia and Japan will be given the opportunity to battle it out to become the next K-Pop superstar.

Each country will be selecting the most outstanding contestants from each territory for preliminary auditions. After the contestants’ heated battles, the survivors will be flown to Seoul to receive professional training and compete for the final showdown in Korea!

The finalists’ ups and downs on the road to success will be captured and shown on the reality series on tvN. What’s more is that several popular K-POP stars will be featured every week. They will be mentoring the contestants, performing in the show, and even taking the judging roles.

The winner of the contest will receive an intensive vocal training along with an album release. The winning star will also get a chance to make a debut stage appearance on 2013 MAMA, the leading international music awards show in Korea.

To audition, all you need to do is bring out your cam and star filming. Upload your best K-POP sing-and-dance routines to K-Pop Star Hunt’s official website at www.tvnstarhunt2.com. Submission of entries ends on September.