He's Back :) If you remember, Paolo (BF for 8 years and is now my fiance) left for Canada last September for an on-shore assignment for work. Initially, his company planned to have him there for a year (well, go back in the Phils for Christmas and go back to Canada on Feb) but things changed on the middle of his stay there. Instead of staying there for long (which his company may thought that it was costly), he was sent home earlier than planned -- from 1 YEAR to 2 MONTHS. Eventhough its a bit heartbreaking for him (cause of the possible income that could really help us for our wedding) I couldn't help but celebrate cause he'll be back. It's different to be apart from someone who's ALWAYS with you for 8 years. It's crazy. For me, no money can ever replace the time you spend together. Right?

Paolo posted this while he was on his 8hour lay-over at Detroit Airport last Nov 13. I felt really excited when I saw this on Instagram

At around 12am-ish (Nov 14). Paolo's parents and I were already at the airport to wait for him. Although the three of us were already VERY SLEEPY, our determination to see Pao was stronger than anything. And to surprise him on his arrival, I brought this PASTRY PROJECT Red Velvet Cupcakes for him. Cute no? I ordered it a month before pa, when I learned that Pao's going home na. 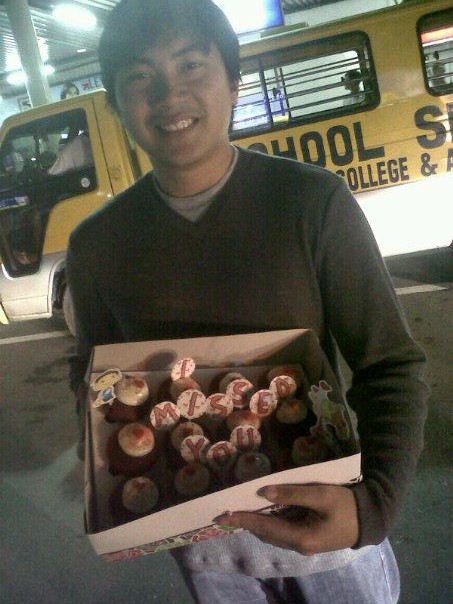 FINALLY!!
His flight was delayed so he arrived past 1 AM :) Weee! Awkward to kiss infront of his parents but we did! (ganon pala ang feeling, lol) I was SUPER HAPPY lang cause I WAS REALLY LONELY while he was away. Imagine my best friend, partner, companion and literally everything IN YEARS, who's (the most) always easily available to be there for me was not there. Haay oh well, at least now he's here and I AM SO HAPPY <3 p="p">

His family and I went to the nearest Shakeys to have some midnight snack. Puyat but worth it :) Finally a photo together!!

I know for some its a bit babaw cause we were only apart for a couple of months but it was 2 months! I salute couples who can survive LDR cause I cannot imagine if I can deal with it if it happens to me. For now, we're still not sure if he's going back to Canada again but he assures me that if he does, it wont be long.

:) Sorry for another cheesy entry. I cannot think of anything else to post but this. And oh, he accompanied me earlier at the UNIQLO Pre-opening launch at SM The Block. Cute cause he was having some "jet lag issues" while we shop. Nevertheless, he was happy cause I bought him clothes too (aside from the gift I gave him) cause its his birthday on Friday.

And I have been preparing things for him.. from cupcake to a surprise gift, to shopping. Super happy ko lang cause he's back and we'll celebrate his birthday together :)

LifeAndBows said…
You guys are so cute. You are right no money is worth the time being together,
XO,
Zhanna
www.lifeandbows.com
15.11.12

Michelle Bugante said…
No it's not mababaw! I would be very happy too if I get to see the love of my life after being separated for a while. hihihi Two months is a long time naman hehehe Glad he's back and that you're so happy! mwah!
16.11.12

MrsMartinez said…
Aww such a cutie couple! Is Uniqlo on sale?