If we're friends on facebook, you probably know that last Friday was the scariest day of my life. It was also the day where I spend the most horrifying and longest 15 minutes of my life. The day where I literally thought I was going to lose my son. 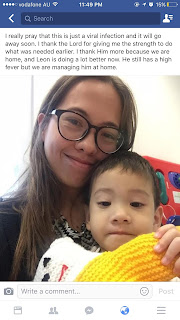 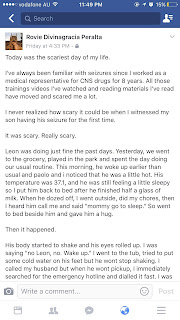 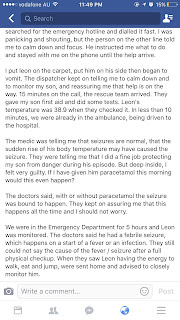 Until this day, the image of my son shaking uncontrollably with his eyes wide open haunts me. I can't stop blaming myself for allowing this unfortunate event to happen to my son. Every minute, of every day, I keep on playing the events that happened that morning:

* He woke up while I was preparing breakfast for his dad - a couple of hours early from his usual wake time.
* He smiled at us and said, "why are you awake?" He kept on teasing us the whole morning.
* We asked him if he wanted to eat with us, he said he wanted to play.
* I asked if he wanted milk, he said yes, so I made him one.
* He looked a little sleepy, I asked him if he wants to go back to sleep, he said yes.
* He was a bit warm, my husband and I checked his temperature. It was 37.1
* Husband and I  decided to just monitor and bring him to a doctor in case he feels worse
* Leon went back to sleep
* The husband left for work, I was with Leon in the bed
* The washing machine beeped so I went outside to hang the clothes.
* Leon called me. He even went outside of the room and asked me if I could sleep with him.
* I went to bed beside him, hugged him.
* Then he started shaking - an hour after my husband left.
Then the rest happened. 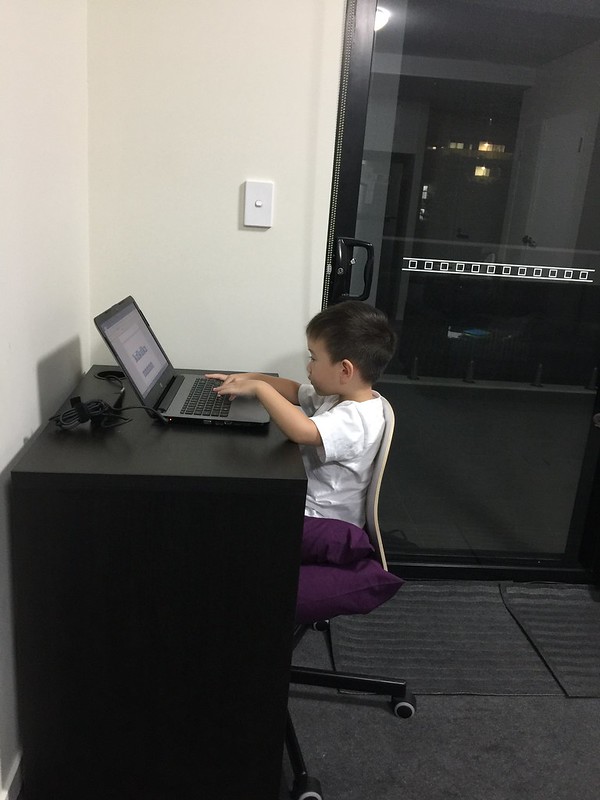 This was Leon the night before - very playful and naughty

Although Leon is actually doing a lot better now, I am still perplexed on what happened that day. Currently, Leon is back to his usual active self, as if nothing happened. His follow-up check-up to the GP earlier said that he has a light upper respiratory infection that may have caused the fever last Friday. We are not yet advised to give antibiotics, but was encouraged to let the body fight off the infection naturally.

Still, a lot of questions remain.

If I just gave him paracetamol that time, would he not convulse?

I said that to the paramedic, and to the emergency doctor who attended to Leon while we were in the E.D. They both said that I did not do anything wrong, that I did what's best for my son. That febrile convulsions happen unexpectedly. Even if I gave paracetamol or ibuprofen, the seizure would still happen.

It bothers me. How can a perfectly healthy boy suddenly convulse?
That the reason why Leon had his seizure is because, in less than an hour, my son's temperature went from 37 to 39 (or more). That his body is still too young and was not able to cope up with the sudden spike in temperature. That the convulsion was his body's natural response to that change of temperature. That an infection - viral or bacterial in nature was just starting in his body.

What caused the fever?
During our visit to the emergency department, the underlying cause of his fever was not determined. That time, the infection was still viral for it was just starting inside Leon's body. Leon was thoroughly examined and he was okay. After four hours, he was already eating, standing up, walking and even jumping. He looked very normal. We were discharged and given specific instructions what to do in the next couple of days. 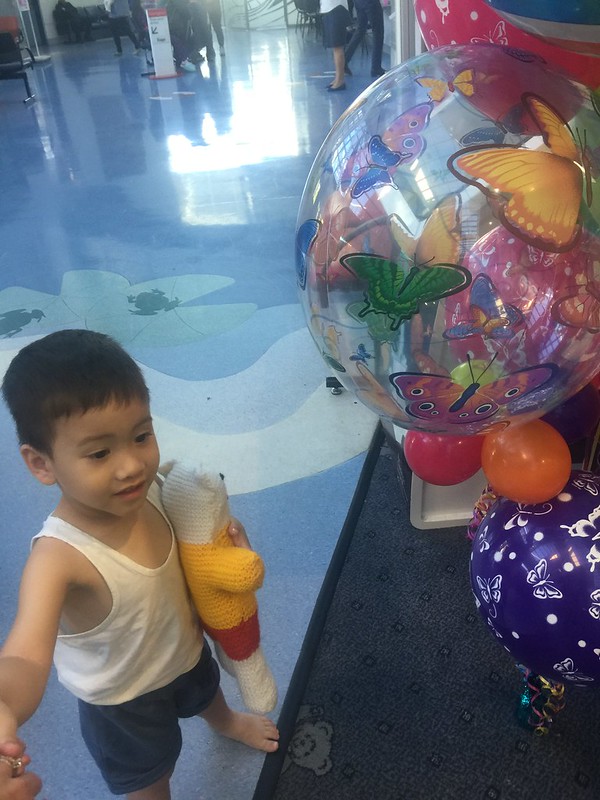 This was Leon in the hospital, 4 hours after we have arrived. As if nothing happened
They kept on telling me that I did a fine job protecting my son from possible danger during his episode. I honestly believe that I was panicking the whole time. It was hard to have the presence of mind when you see your son convulsing non-stop and you're left alone in the house. I thought I was going to lose my son that time. I'm grateful to The Lord that I did not. That it was just a seizure.

How do I prevent seizures from happening again?
The doctors said that febrile seizures happen in 20% of children - especially on moments we never expect. Febrile seizures would not cause long-term brain damage and are different from epilepsy. After what I have witnessed and experienced, I don't want it to happen again to my son, to my future son, or to anyone's children. Though uncontrollable, here are some ways we can prevent febrile seizures.

Keep the child cool
Remove the child's clothes and blankets when they feel warm. When the medic arrived, the first thing they did to Leon was to remove all the clothes he was wearing. They did a temperature check, it was 38.9. 10 minutes after, his temperature lowered to 37.2

Do not take a low fever for granted
If you think your child is feeling a little hot, dress them lightly and give them lots of water and or fluids. Keep the surroundings cool and wipe them with a cold towel to lower down the temperature. If the temperature is high (39 and up), immediately give Paracetamol / Ibuprofen.
I still believe that we should have done this step but we did not cause Leon's temperature was 37 that time.

Always have a thermometer, icepack, and fever medicine ready
Cause really, you'll never know when will it happen!
Leon was very active the night before that we were dancing, singing and reading books before we went to bed. We never thought he would be sick the next morning.

In case seizure happens, keep calm
If it happens for the first time, it would be very very terrifying. I was shouting, screaming loud when I saw him seized. I had to collect myself while I was carrying him that I dialed the important persons that time - the emergency hotline and my husband.

Keep in mind the emergency number
I would not know what to do if 000 did not instruct me to calm down and look after my child. I was literally screaming and crying to him but he kept on telling me to calm down and focus on what's important: KEEP THE CHILD SAFE. He told me to monitor his breathing, his color and place him in a safe location where he won't be harmed. He told me to not be afraid cause seizure happens all the time, that help is on the way and I do not need to panic. He basically guided me throughout. He was my guardian angel.

Focus and try to time the seizure
During a seizure, lay your child on his / her side while keeping him away from any obstacles. Vomiting would usually come after an episode and lie them on their side will prevent them from aspiration. Try to keep time on how long the seizure will take place as you would need it to report to your doctor.

And I believe it all worked. 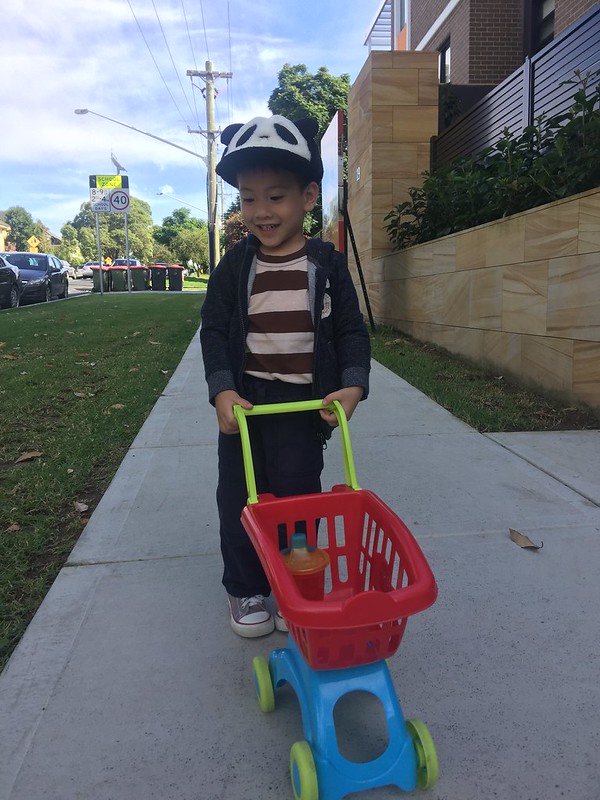 This is Leon earlier this morning, happy and excited to visit his GP

Our follow-up visit to the doctor confirmed that a (viral) infection has caused Leon's seizure last Friday. Leon has a runny nose and a cough - indicating a possible upper respiratory tract infection. However, we still have to wait for confirmatory results from the urinalysis. Since Leon is very active now, with his appetite increased, the doctor advised to let the body fight off the infection naturally. If he would have a fever in the next couple of days, we may start an antibiotic treatment.
which ( I'd like to believe) we don't need anymore cause Leon his slowly going back to his normal self. 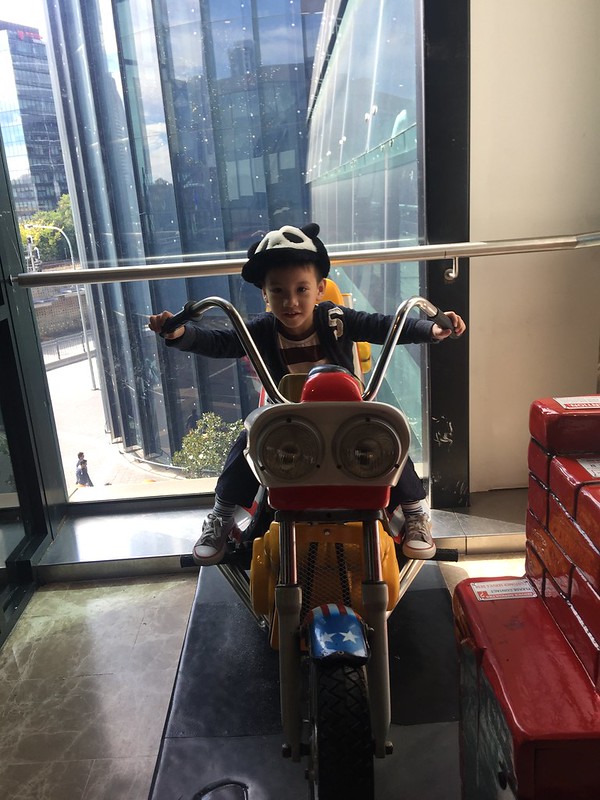 This was Leon in Westfield! The clinic is inside the mall and he was in his usual active, playful self.

I know this post is a very lengthy post but I just wanted to share my experiences to shed light to other parents out there. I hope this post would be useful for you, or your loved ones and guide you on the things that you need to do in case seizure/convulsions happen.

Labels: Febrile Convulsion health motherhood PERSONAL Toddler What To Do In Case Of A Seizure