Is It Worth To Send Your Child To Daycare? 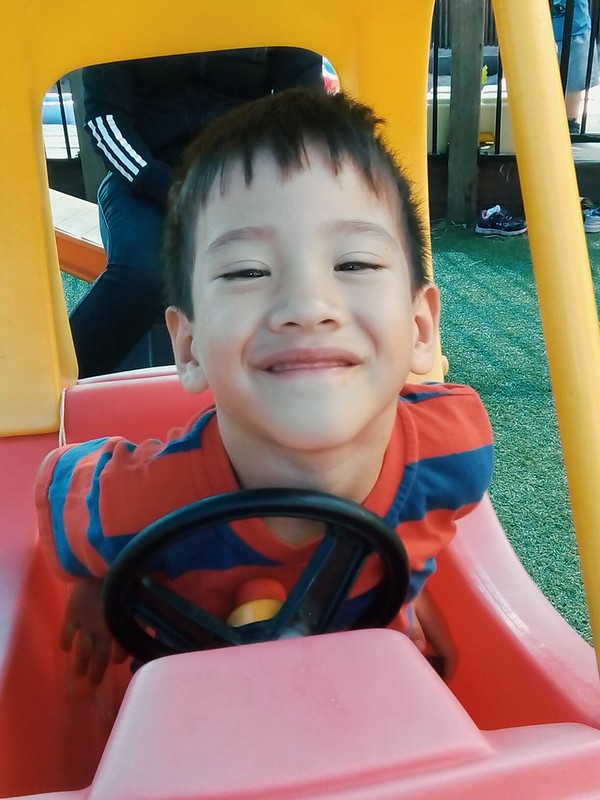 It depends on the parent, to be honest. I remember how much I struggled deciding whether or not it was a good idea to send Leon to daycare. A part of me was saying that it was a bad thing to do that I should just stay at home and take care of him myself. Guilt was eating me back then - imagine leaving your son for at least 8 hours, and let other people look after him.

Yet, reality happened. To cut the long story short, I had to help the husband bring in more income to help in our finances. Have I told you that we have started our application for permanent residency visa? We actually had to take a personal loan to pay for it - which I'll probably share on a different post. Anyway, more than 6 months after sending him to his childcare for the first time, I must say that my decision, our decision was not bad, after all. Leon have shown significant improvements, in almost all aspects. 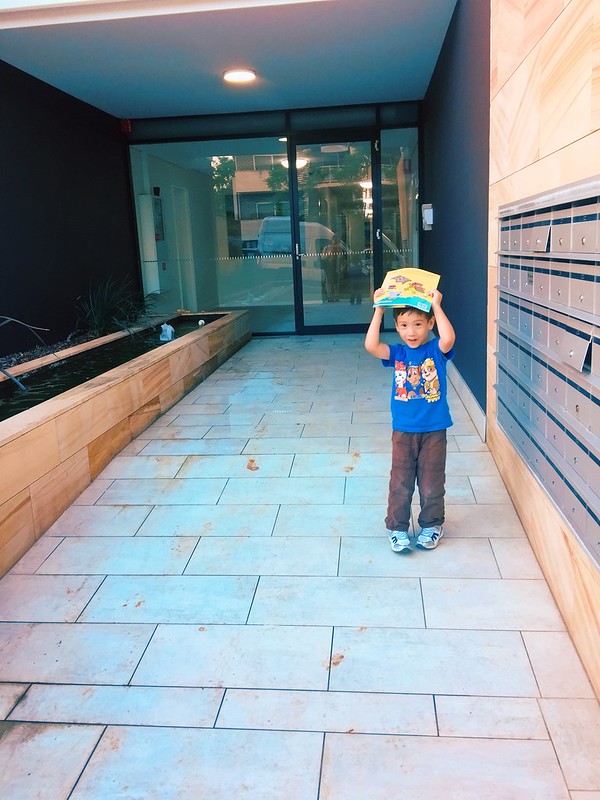 On Authority
Blessed are the mums with kids who listen to them. Admittedly, a year ago, Leon would have everything in his way - eat what he wants, do what he wants at any given time. He would listen, sometimes, especially when we threaten him that will put him in the naughty corner but it was ALWAYS a struggle. Months in daycare, we have observed that he started to acknowledge our words, listen more and realize that there could be consequences for not listening or following us. He became more aware of authority. Don't get me wrong, there would always be times that Leon would be silly or would be naughty but he became less of a brat compared to how he was 6 months ago. 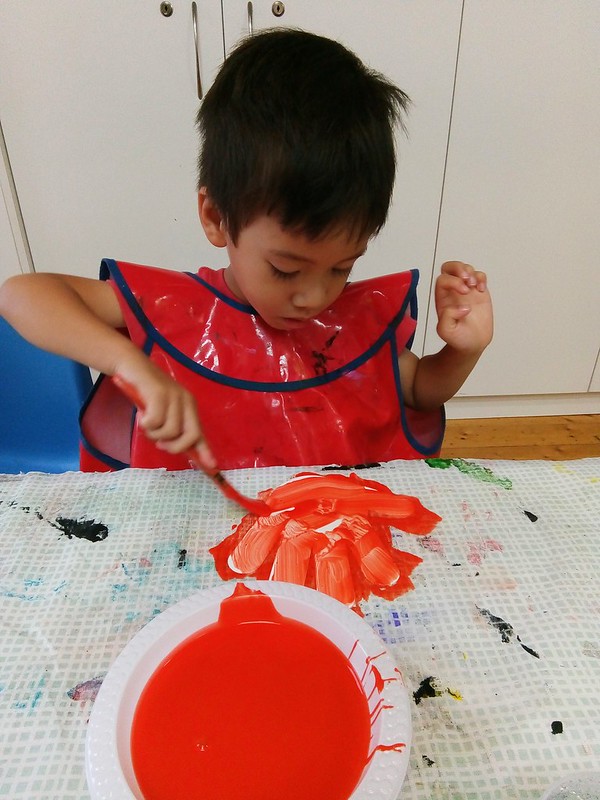 On Food
Chicken (nuggets) and rice/chips - the only type of meal that Leon would always (demand). I had a hard time introducing him to different kinds of food. He won't eat noodles, pasta, bread or anything else. If not chicken and rice, he would rather eat spam or any fried food. For any consolation, he would eat his favorite fruits, banana, and grapes.
Now, we see him starting to eat more variety. When I picked him up yesterday, he was eating pita bread with hummus along with his friends in school. I told his teacher, "Leon would not eat that at home!" The teacher responded, "most kids are like that, they eat anything here in school because they see other kids doing it." Apparently, Leon eats EVERYTHING they serve in school - from pasta to noodles, to curry, to fruits and vegetables. He even said to me one time, "Mommy, Vegemite is not my favorite!" Can you imagine Leon eating Vegemite sandwich? Though he is still a little picky during dinner time at our home, we can see that slowly, Leon is eating with much more variety. 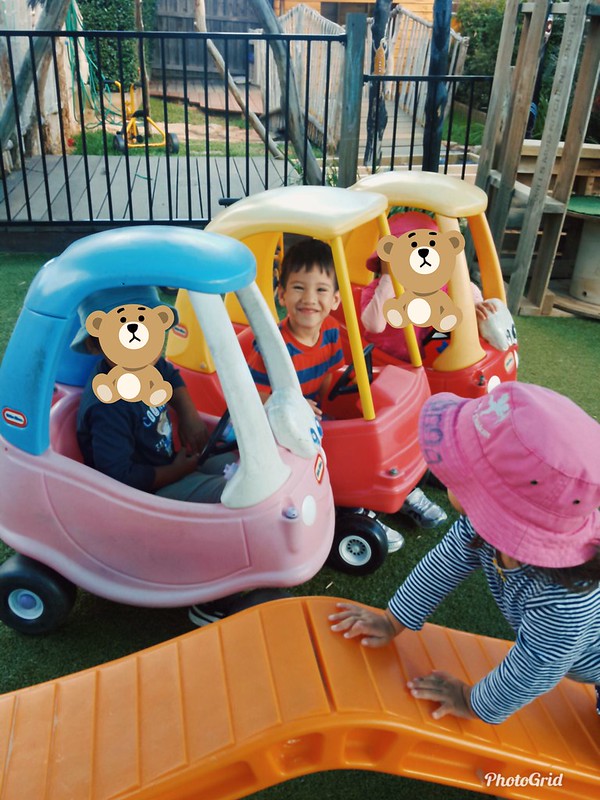 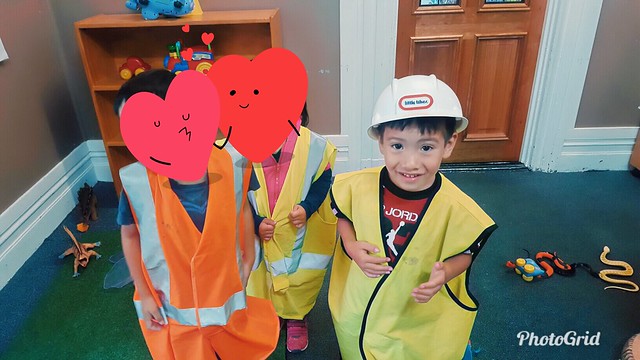 On Friends and Social Interaction
When we were still at home, Leon would always crave for social interactions. He would always look forward to our library playdates, playground days or just playing outside. He is usually very friendly and outgoing - he would approach kids and just play with them. Going to daycare gave him that interaction that he needs. At an early age, he already has a set of friends - friends he would always tell us about. Each day, he would tell us about Olivia or Jacqueline or Akshay, on how much he loves them. He is always enamored with the sight of babies - probably because there is a baby room in daycare, and would always refer himself as a big brother. He would even look for his own baby brother and wonder why he doesn't have one, which is a different story. Going back, Leon became more confident with other people, became more sociable and became more open. The kids (and teachers) in daycare came from different heritage and he becomes more aware and more respectful of other cultures. The school even has a harmony day that teaches kids to acknowledge and respect the different culture of each heritage. We're pretty sure he'll grow up to be very open-minded and be respectful to other people, whatever race they are from. 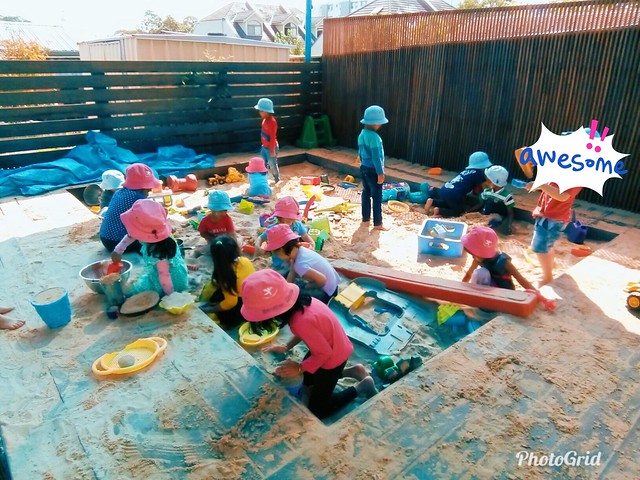 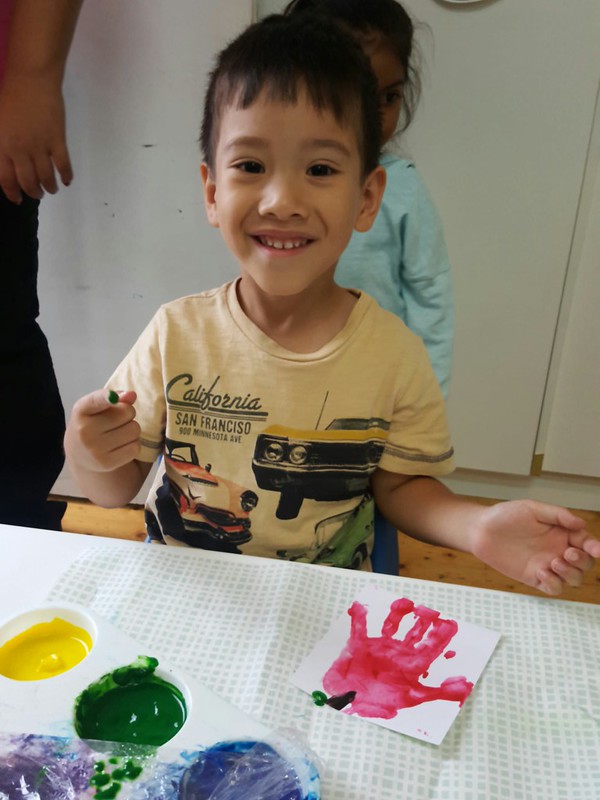 On Being Independent
You know your kid is really growing up really fast when they become to do things on their own. Currently, Leon is now toilet trained (except for making poo in the toilet, which is something we're still working on), he can wear his shorts, socks on his own. He can also follow simple instructions. Hindi naman sa pinapabayaan sila sa daycare, but the teachers really encourage kids to do things on their own. They let them eat by themselves, play on their own, do things on their own. Minsan nga pagsundo ko kay Leon ang dungis-dungis nya.When I enrolled Leon in daycare, he was still wearing nappies (diapers) to school and was still drinking milk from the bottle. Months later, Leon started to despise nappies and started asking us to put underwear on him 'cause he's already a big boy. He would go and sit on the toilet himself - drag a stool, step on it and do his wee. He can even wear his shorts back on his own. He wears his socks by himself and put on his shoes. He brushes his teeth himself - something they teach in school, and washes himself during bath-time. Sometimes, nagugulat kami. We would see him fix his toys, throw the rubbish in the bin himself - like a big kid. Impressive, yes. But also heartbreaking cause it is also an indication that is becoming less of a baby, and more of a big boy. I think I need another baby, then. 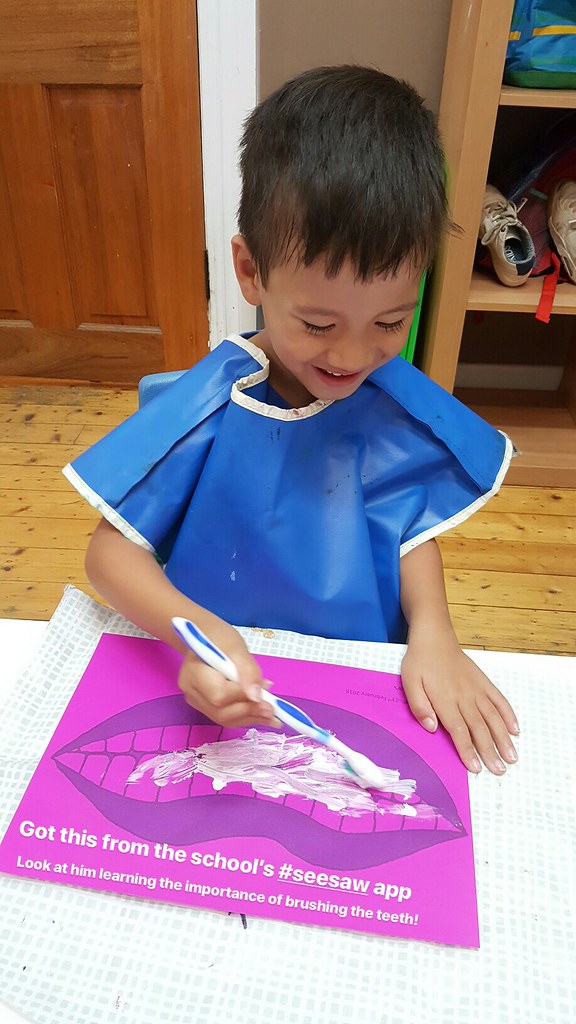 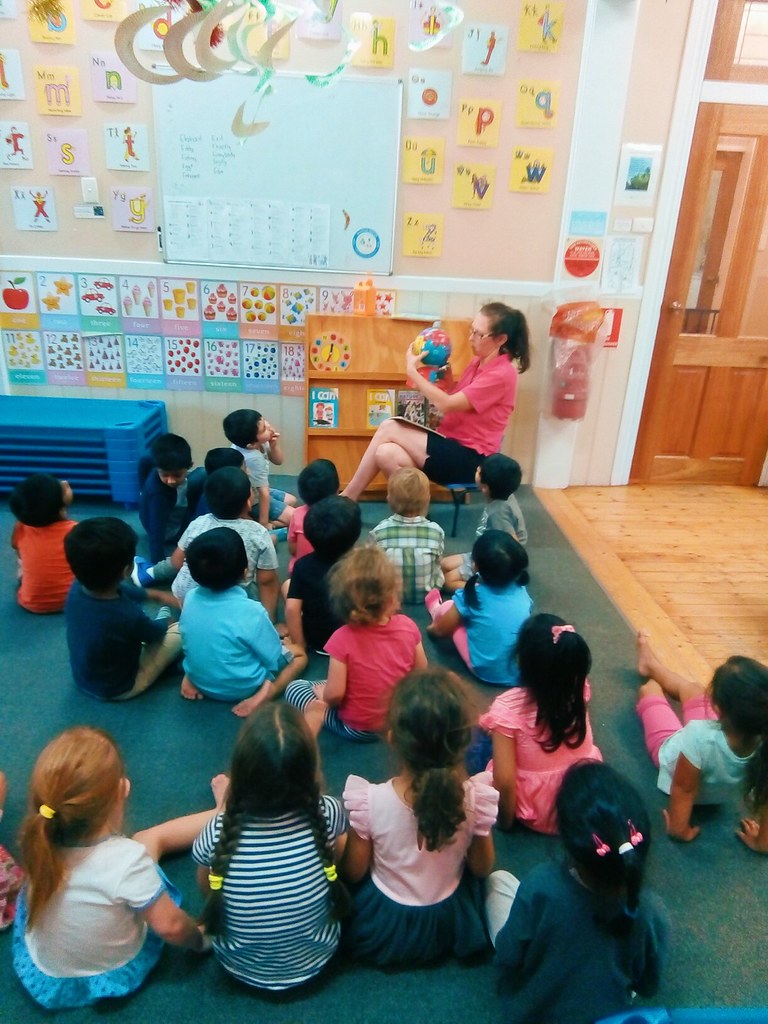 Daycare can be considered as preschool here and while the kids are in the preschool room, they are also being prepared for big school. Here in Australia kindy (again, their slang for kindergarten) starts at age 5. School starts in January and if the child is turning 5 before the end of July, then they can enroll in kindy.  We have put Leon in the school readiness program and he's doing quite well. Did you know that at 3, Leon already knows how to read? He can read some signs and brands through word recognition. The basics - numbers, colors, alphabets are too basic for him. His intelligence is impressive, I must say.

Okay, I'm not saying that daycare is a perfect place. Of course, along with the advantages, there are disadvantages as well. Remember the time that Leon got very sick with pneumonia? Although the main reason for him being so unwell is because of misdiagnosis, there's a big possibility that he got the virus from daycare. He is surrounded by more than 20 kids a day, and who knows what sorts of viri and bacteria that spread there, right? There are times that Leon would go home with some bruises and scratches - probably from playing rough with other kids -- pero ganon talaga, bata yan e. Daycare regulations here are very strict and all staff is required certifications in early education and first aid, so they are highly qualified. and alam nyo ba na bawal nila pagalitan ang bata or sigawan? Fun fact lang. 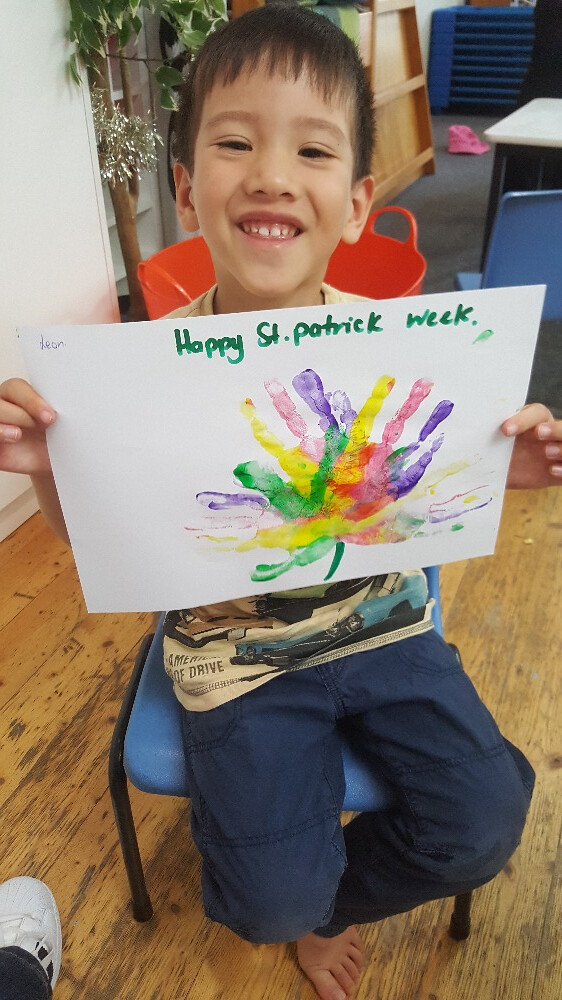 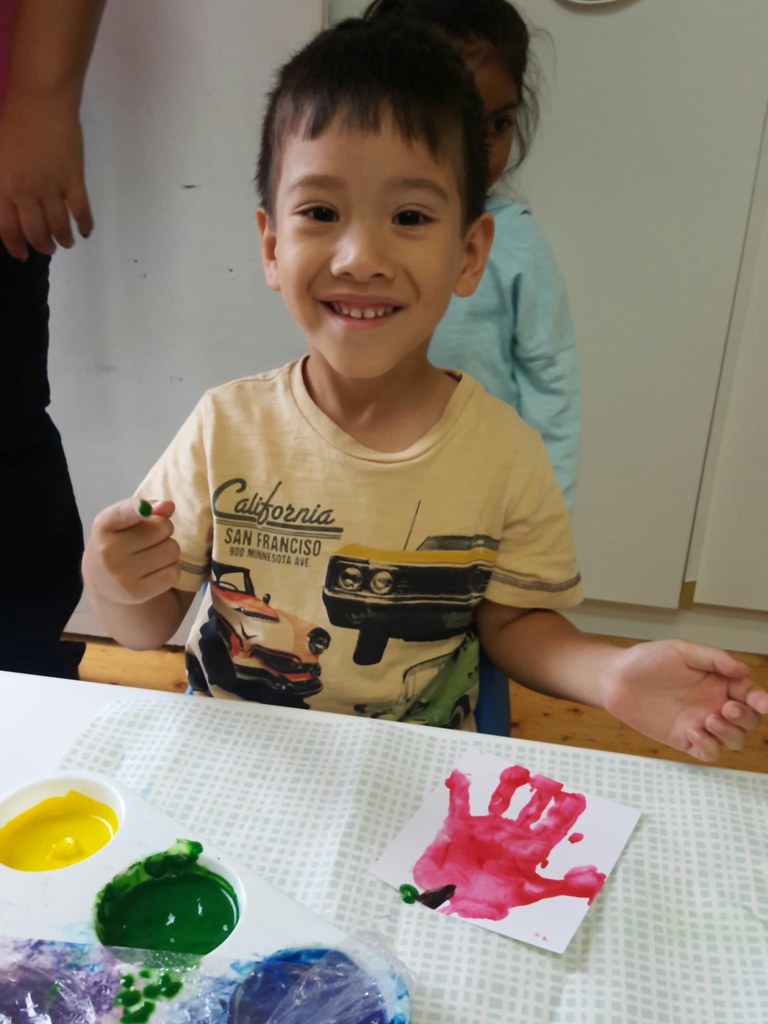 I think the guilt will always haunt me. There are still days that I wish to just stay at home again and take care of him myself; but what can I do, momma needs to work and work really hard. The living expenses here are so high (did you know that Sydney is one of Top 5 cities with high cost of living). At least while I earn and help the family out, Leon is learning and interacting with other kids. Have I mentioned that I am working to literally pay for Leon's daycare?  For permanent residents and citizens, they have a Centrelink benefit where the government funds a percentage of the daycare cost, depending on the household income (usually 40%). Since we are still on a working / temporary resident visa, we don't get that payment and have to pay $85/day in full. Yes, $85/day or Php 3,300++ or Php 100,000/month. Nung sinabi ko nga to sa colleague ko sa work, ang sabi "bakit nagtatrabaho ka pa! Ang mahal" 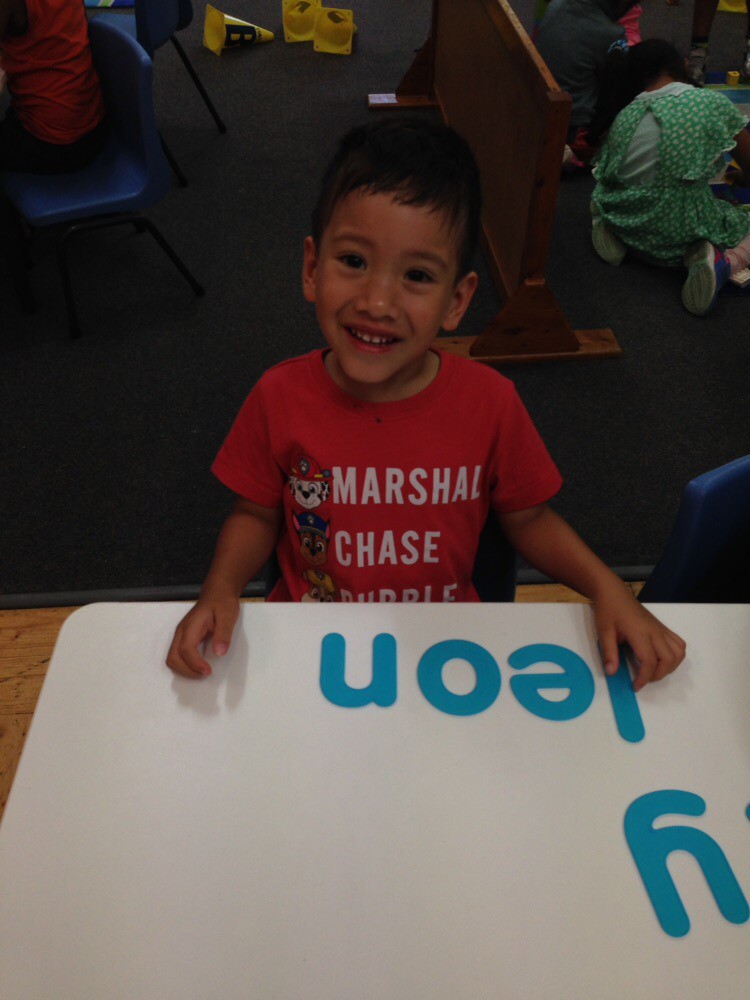 Look he can even spell his name!

Well, that's life. We need to make some sacrifices for a future gain. For me, the moment we get our permanent residency visa, we get to have that rebate, increase our savings and find another job with a higher paying rate given my experience. For Leon, he gets to blend in the culture, adjust to the lifestyle and significantly improve in a number of aspects.

PS
Most of the photos were grabbed from the Seesaw App that Leon's school uses to update us, parents. The faces of the other children were blurred for privacy purposes